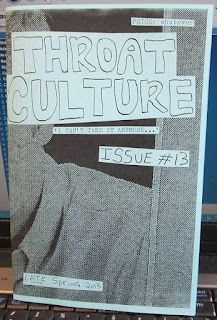 A smile dawned on my face as I read the title: Throat Culture. I love it. Then there was an article about the documentary Jandek on Corwood which is a fantastic film chronicling the enigma of the musician known as Jandek who ahs been recording & releasing lps since 1978 but who remains a mystery. (side note: for the most part, I believe there is no real mystery around Jandek – he is someone who has allowed the creative process to speak for itself). So immediately I was taken with Throat Culture, which also has reviews of the documentary about K Records (I still have a Lois Mafeo record somewhere). Throat Culture also features well written reviews of cassette tapes and 7” vinyl, my personal favorite musical formats. What a joy!
Posted by DJ Frederick at 11:06 AM