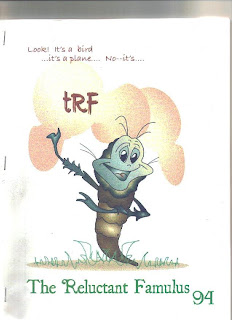 When The Reluctant Famulus appears in my mailbox I quickly set aside some time in the easy chair for reading. This zine is always fascinating cover-to-cover, involving a variety of articles by various writers and a considerable letters of comment section.

The Reluctant Famulus usually opens with notes from the editor – this time he muses on a fanzine called Random Jottings #8 about Richard Nixon, then Smithsonian Magazine, 3-D printing, apparitions on Mars, pareidolia, Mark Twain, and then we’re off for the rest of the issue, Gene Stewart discusses the Dan Brown effect on novels, Alfred D. Byrd launches into the history of Kentucky in the Civil War, Matt Howard traces the obscure genesis of rock & roll via Indiana & D. D. Ferguson, and we’re not even halfway through the issue. This is a thinking person’s zine, and I’m thrilled to be invited to the party as a reader.
Posted by DJ Frederick at 9:02 PM