Zine Review: Before the Hollywood Backlot 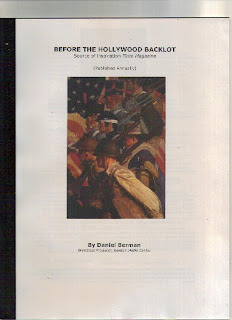 Zines like Before the Hollywood Backlot renew my faith that print is still alive. Then again, it’s been an amazing month here at DJ Frederick’s Zine Cottage, I’ve read Cheer the Eff Up by Jonas, two issues of Hootenanny & several issues of Something For Nothing – zine life is on the upswing!

Before the Hollywood Backlot is a fanzine celebrating (you guessed it) – film. It’s full color, and contains articles on unfinished Orson Welles projects, art deco style, in film history (with an emphasis on Woody Allen), World War II propaganda films, a list of lost (presumed forever) films, & tons more. Before the Hollywood Backlot is full of exceptional content presented in an accessible style. Even the “coming attractions” blurb at the end makes me want to read the next issue – television’s worst broadcasts you’ll never see. Right up my alley!