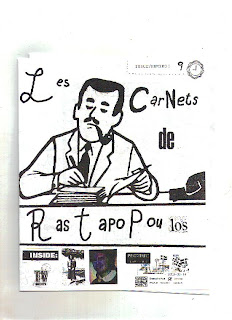 The world has changed a lot in the past three decades. Heck, the world has changed a lot in the three seconds that it took you to read these sentences. Once upon a time, in a world somewhat but not entirely unlike our own, people placed pen to paper in an attempt to communicate with the rest of the world. Affixing postage to envelopes, these missives were sent out with hopes that our intended recipients would read them & reciprocate. It was called correspondence. Some called it “pen pals”.

Les Carnets de Rastapopolous #9 continues the story that Rob began in issue #8, of finding pen-pals behind the iron curtain of the cold war, one of the few ways (other than ham / shortwave radio) that people could learn about the lives of other people in communist countries during that era. In this issue, Rob tries to follow up with and reconnect with his former pen pals to see what has changed or developed in their lives. Les Carnets de Rastapopolous #9 is a chronicle of Rob’s process. This zine is a work of art and a labor of love and thoroughly absorbing. Highly recommended for anyone who appreciates letter writing.