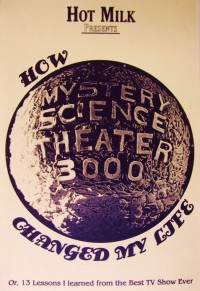 How Mystery Science Theater 3000 Changed My Life
Or, 13 Lessons I learned from the Best TV Show Ever

How could I resist reading a zine with a title like that?

In the not too distant past there used to be a TV show called Mystery Science Theater 3000, or MST3K, which debuted back in the murky 1980’s on a backwater UHF station called KTMA in . The early episodes featured Joel Hodgdon, Trace Beaulieu and J. Elvis Weinstein and a cast of creaky robots made from styrofoam and gawd only knows what. Joel would watch cheesy b-movies with the bots and make ironic & sarcastic comments. Sometimes there would be a stretch of several minutes with no commentary at all. I watched some of these episodes and they barely hinted at the sheer genius that was to evolve on Comedy Central and the Sci-Fi Channel (now known as syfy, I believe).

This zine speaks to the converted (I’m a card carrying MSTie) but would be a fun read for novitiates to the series. The “lessons” are definitely there to be found if you’ve even watched just a handful of episodes of MST3K and are well thought out and explained by . There’s also plenty of other snippets and glimpses into the world of MST3K – the invention exchanges, the skits and songs, the worst movies of all time. I am grateful to have been introduced to the films The Creeping Terror, and Manos Hands of Fate which inspired my radio shows Mystery Science Radio and Night Train to Mundo Fine.

Bottom line: every aspect of this zine is excellent. There may have been better “series” on television over the years, but in the spirit of DIY fun, obscure pop references and clever writing, this was the best “TV show” ever. Read this zine and find out why.

May the Satellite of Love rust in pieces.